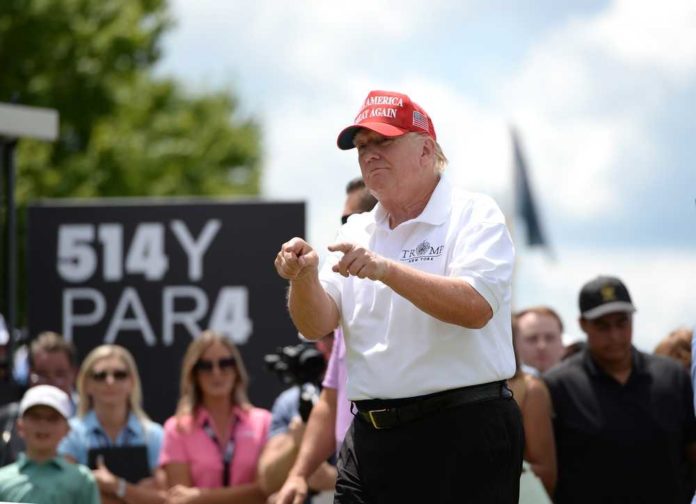 A group of House Democrats have introduced legislation to ban President Trump from holding future federal office again under the 14th Amendment.

Rep. David Cicilline (D-RI) led the introduction supported by 40 House Democrats. The bill plans to use Section 3 of the Fourteenth Amendment which states that no one who previously took an oath to support the Constitution and engaged in “insurrection or rebellion” shall hold any office under the United States. This refers to both military and civil positions.

Today, I joined @RepCicilline & @RepCohen in leading a resolution strongly condemning Trump’s calls to terminate the Constitution. As a former president, Trump’s words are powerful and completely unacceptable.

The bill accuses Trump of orchestrating an insurrection with the Capitol riot on Jan. 6, 2021, causing a brief disruption to the certification of President Joe Biden’s 2020 election victory. In a release announcing the legislation, Cicilline alleged that Trump engaged in the insurrection with the intention of overturning the election.

“You don’t get to lead a government you tried to destroy,” he said in the statement as he stated that the bill is packed with evidence and testimony that shows how Trump engaged in the riot.

The legislation also reportedly describes how Trump encouraged the Jan. 6, 2021 violence and refused to denounce the mob that stormed the Capitol that day.

“The 14th Amendment makes clear that based on his past behavior, Donald Trump is disqualified from ever holding federal office again and, under Section 5, Congress has the power to pass legislation to implement this prohibition,” Cicilline’s statement read further.

Cicilline, who was an impeachment manager during Trump’s 2019 impeachment, sent a letter to his fellow Democrats to solicit co-sponsors for the bill.

The bill comes weeks after Trump announced he would be contesting in the 2024 presidential election. If he goes on to contest, he would be going against Biden who has revealed intention to seek reelection.

Trump was the first major candidate to announce his run for the presidency in 2024. It is unknown if the bill will actually stop him. But by January, the Democrats’ plan is expected to plunge, as Republicans will dominate the lower chamber after winning a majority of seats in the midterm elections.

The House January 6 Committee is scheduled to hold its final meeting on Monday. At the meeting, members will vote on whether to request that the Justice Department pursues criminal charges related to the Capitol riot against Trump.