The following story is brought to you courtesy of PJ Media. Click the link to visit their page and see more stories.

“After several conversations and literally running away from reporters, Minority Leader Kevin McCarthy (Q-CA) made clear that he is refusing to take action against conspiracy theorist Rep. Marjorie Taylor Greene,” Pelosi alleged. “As a result, the House will continue with a vote to strip Greene of her seat on the esteemed House Committee on Education & Labor and House Committee on Budget. McCarthy’s failure to lead his party effectively hands the keys over to Greene – an anti-Semite, QAnon adherent and 9/11 Truther.” 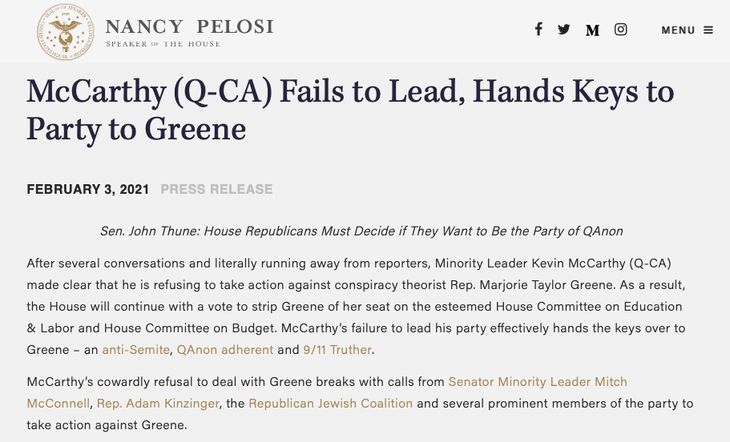 Greene has indeed supported a broad range of conspiracy theories, from QAnon to the idea that the September 11, 2001, attacks were an “inside job”; to the claim that school shootings did not really happen but were a “false flag” to push gun control; to the idea that California’s 2018 wildfires resulted from a Jewish space laser. She also “liked” comments on Facebook about putting Democrats — including Pelosi — to death. Greene has tiptoed around these issues, refusing to unequivocally disavow previous comments and acts she took on Facebook.

Contrary to Pelosi’s accusations, however, McCarthy has not turned over the keys of the GOP to Greene. Instead, he unequivocally condemned her Facebook comments and released a statement explaining that he had confronted Greene and would hold her to a higher standard.

“Past comments from and endorsed by Marjorie Taylor Greene on school shootings, political violence, and anti-Semitic conspiracy theories do not represent the values or beliefs of the House Republican Conference. I condemn those comments unequivocally. I condemned them in the past. I continue to condemn them today. This House condemned QAnon last Congress and continues to do so today,” McCarthy began.

The House Republican leader explained that he confronted Greene over her previous statements when he met with her on Wednesday.

“I made this clear to Marjorie when we met. I also made clear that as a member of Congress we have a responsibility to hold ourselves to a higher standard than how she presented herself as a private citizen,” McCarthy explained. “Her past comments now have much greater meaning. Marjorie recognized this in our conversation. I hold her to her word, as well as her actions going forward.”

McCarthy acknowledged that Greene’s comments “have caused deep wounds to many” and he explained that he offered House Majority Leader Steny Hoyer (D-Md.) “a path to lower the temperature and address these concerns.”

“Instead of coming together to do that, the Democrats are choosing to raise the temperature by taking the unprecedented step to further their partisan power grab regarding the committee assignments of the other party,” the Republican leader added, referring the House vote to strip Greene of her committee assignments.

McCarthy condemned Democrats for focusing on Greene rather than dealing with bad actors in their own party.

“While Democrats pursue a resolution on Congresswoman Greene, they continue to do nothing about Democrats serving on the Foreign Affairs Committee who have spread anti-Semitic tropes, Democrats on the House Intelligence and Homeland Security Committee compromised by Chinese spies, or the Chairwoman of the House Financial Services Committee who advocated for violence against public servants,” he noted.

Indeed, Rep. Ilhan Omar (D-Minn.) — a member of the House Foreign Affairs Committee — claimed that Jews had “hypnotized” the world and said Americans only care about Israel because of the American Israel Public Affairs Committee’s (AIPAC) “Benjamins. Rep. Eric Swalwell (D-Calif.) serves on the House Intelligence Committee despite his romantic history with a Chinese spy. Rep. Maxine Waters (D-Calif.), the chairwoman of the House Financial Services Committee, urged leftists to harass members of the Trump administration in public places.

“In the end, this resolution continues to distract Congress, especially given the limited time that Speaker Pelosi and the Democrat leadership want the House to debate and work, on what it needs to focus on: getting Americans back to work, getting kids back to school, and providing vaccines to all Americans who need it,” McCarthy concluded.

McCarthy is correct to point out the Democrats’ lopsided focus on Greene, but Greene does need to publicly address her previous statements and give the kind of condemnation McCarthy did in his statement.

McCarthy was right to confront Greene, and Greene should put out a statement explaining and condemning her previous comments so she and the GOP can put the whole mess behind them. Pelosi should retract her heinous accusation against McCarthy. This episode illustrates yet again that Democrats intend to brand all Republicans and conservatives as conspiracy theorists, no matter how false the charge.

The Biden White House Has Given Up Holding Hands and Singing...

Watch The AWKWARD Moment one Question about Trump REVEALS The War...

The Biden White House Has Given Up Holding Hands and Singing...